25 Not Out For “Loyal And Fantastic” Ann-Marie 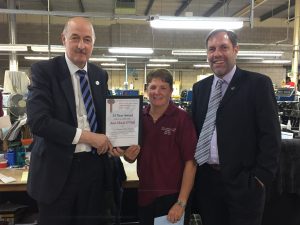 A loyal and devoted employee from St Helens has earned praise from the directors of TALL Security Print after celebrating a special anniversary. Hard working Ann-Marie O’Neil has racked up 25 years of experience at the Runcorn-based company.

Ann-Marie, who works as a Finishing Manager, joined TALL Security Print in May 1994 at a time when John Major was Prime Minister and Wet, Wet, Wet was at number one with Love is All Around. She was initally appointed to the position of Finishing Operative, before fulfilling other roles including Production Assistant.

Away from the office, located in Manor Park, Ann-Marie enjoys watching all types of sport, including Rugby League – St Helens of course. In her earlier years she played hockey for Lancashire and the North of England. To celebrate the milestone, Ann-Marie received a certificate and a £250 gift voucher,

Ed Starkey, Operations Director at TALL Security Print, said: “We are very lucky to have such a loyal and fantastic employee like Ann-Marie. She joins six other employees in the “quarter of a century club”, with a further three members of staff due to reach the landmark later this year. Ann-Marie has proven to be a fundamental part of our company’s ongoing success, and we hope she stays with us for a long time to come.”