Businesses Should Be Keen To Avoid Pitfalls Of A Hard Border 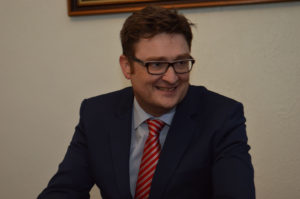 “Businesses should be keen to avoid pitfalls of a hard border”, according to Peter Thomas, Managing Director of DLRT Limited, the Lisburn-based TALL Group Company.

“Barely a day goes by without the subject of Brexit stealing the headlines in one way or another. However, despite an abundance of column inches and thousands of hours of TV footage, reports continue to suggest that only limited progress has been made in the UK’s negotiations with the EU.

As we swiftly head towards the two-year anniversary since more than 17.4 million (51.9%) of people opted to leave the EU, there still seems to be far more questions than answers. This uncertainty continues to have a turbulent effect on many businesses across the UK, and in not least in Northern Ireland.

At the end of this month, the one year countdown to exiting the EU will get underway, and as we edge closer to 29th March 2019 more and more people will get increasingly nervous about the issues that matter most to them.

My observations in this article are in no way a negative judgment on the Brexit vote nor those who exercised their right to vote. However, for me, Brexit specifically relates to the issue of whether there is a ‘hard border’ or not. Currently, in my eyes, everything else is peripheral.

I was originally asked for a comment on Brexit for a magazine back in 2016 and since then we have run the gamut of emotions in terms of ‘will there’ or ‘won’t there’ be a tangible difference to the border status between Northern Ireland and the Republic of Ireland.

Two years later and I still hold the view that it will ultimately be down to the politicians to iron out a plan – and that businesses on both sides of the border do not need the added uncertainty or increased complexity that a hard border would bring.

As the Managing Director of DLRT, the secure printing specialist based in Lisburn, Co Antrim, I commute each day from my home in County Kildare across a seamless border without issue or delay. From a business perspective, the same is true for the products we deliver on a daily basis on behalf of customers back into the Republic of Ireland and the An Post mail system. I am sure this activity is mirrored across many thousands of organisations on both sides of the virtual border.

The idea that the future border may not be as fluid, smooth or frictionless as it has been for at least the last decade is a real concern. Whatever is put in its place needs to be technologically advanced enough to allow ease of movement of people, product and services capital, because there is no doubt that delays will result in loss of competitiveness and increased costs.

Customs controls will create delays whilst also leading to additional administration and bureaucracy. The potential for customs checks and tariffs for cross border activity could seriously affect many Northern Ireland-based businesses’ ability to be competitive in the Republic of Ireland and vice versa. We currently achieve additional savings for our customers in the Republic based on early presentation of product into the An Post network – and any delays at border checkpoints could see these evaporate.

At the moment what we do know is that the uncertainty caused by Brexit has created volatility in the currency markets, prompting many companies to rethink investment strategies, whilst we have also seen some high profile relocations. Business is built on certainty, positive sentiment and stable politics – and I believe avoiding a hard border is crucial to the future of many organisations across the entire island.

On a personal note it would also ruin a pleasant spin home.”

In July 2008, the UK and Irish governments announced their intent to resume controls over their common border and the Common Travel Area in general. Each proposed to introduce detailed passport control over travellers from the other state, where travel is by air or sea. However, the land border would be ‘lightly controlled’. In a joint statement, Jacqui Smith, the British Home Secretary, and Dermot Ahern, the Irish Justice Minister, said:
“It is crucial that our two countries work closely together to ensure our borders are stronger than ever. Both governments fully recognise the particular circumstances of Northern Ireland. Both governments reaffirm that they have no plans to introduce fixed controls on either side of the Irish land border.”
The Times reported that another consultation paper was to be published in the autumn of 2008 on whether people travelling between Northern Ireland and the rest of the United Kingdom should be subject to further checks.
However, in 2011, the governments renewed the ‘de facto’ agreement.